Summary: Leadership today means multiple, contradictory but related paradigms. Including the leader as ego-driven “machine fixer” and ego-less “healer” of human beings and their interactions. Each drives performance in the other. So a good leader today needs both.

Lorraine Leader must deliver the numbers. Every board meeting the investors say “We want more. More topline and more bottomline.” 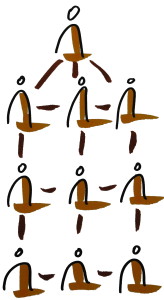 “What else can I do? I’ve tried everything I know, I’ve re-structured, re-engineered, fired and hired … my leadership team just fails to deliver” she asks friendly Phoebe on the treadmill” … oh, and good morning!”

After letting Lorraine complain for 15 minutes, Phoebe asks “I’m experiencing you less optimistic than usual. What are you holding back from telling me?”

“It’s Alice, my teenage daughter. We discovered 6 months ago that she’s been depressed for years. She still refuses to talk to anyone … we’re at our wits’ ends”

An hour later, Lorraine feels more relaxed. Phoebe’s gentle questions have helped Lorraine see a few options she has. They’ve helped her discover some of her hidden big assumptions about how the world works.

In particular, that even more than she’s committed to delivering success, she is also committed to preventing anything unpredictable happening.

And this is true for her work and her family life.

Lorraine has realised that behind both is the same underlying assumption. That if something unpredictable happens, she will lose control, and then she’ll lose her job, her family. So she’ll be back in the poverty she grew up in after her father lost his job when the mines closed. Life just won’t be worth living any more.

But, she never can control what happens in her daughter’s life. Nor in the company and its staff.

“Hmm. Maybe. If you’re right, what are my options at work?”

“Great! Focus on your options looking forwards, not on how you’re doing so far. Three things are also part of your job, in addition to everything you learnt at business school:

Then you’ll deliver the numbers.”

“But – that sounds way too fluffy. Sounds like you want me to be a psychologist, healing individuals and the whole organisation! No way – that is a recipe for an out of control situation … “

“Which you are committed to never allowing … Lorraine, much as the org 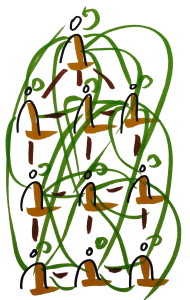 anisation is a machine to fine-tune and control, it is also a chaotic living ecosystem, a hierarchy of relationships. You can only lead in today’s world by integrating both ways of seeing your organisation. And yes, just you will limp if a muscle is torn, so too your organisation. One of your core leadership roles is to heal “torn muscles” in this hierarchy of relationships. Then the individuals and organisation can move fluidly.”

“That’s not my job. I’m a fixer, always in control, whether it’s me, my daughter or my company!”

“Your daughter is nearly an adult. She is not a problem to fix, but rather a mystery to understand. The same is true in your company.”

“Time to shower and get to work. Next time we meet, I’ll tell you how you can replace fixing with catalysing transformation.”

Come back for the next blog in this series!

This blog has been inspired by the leadership development workshops I ran at NaLDS, and Leadership3. I left feeling touched and inspired by the participants’ ability, seldom seen in large organisations today, to work productively with each other. Because they were transparent showing both their strengths and weaknesses, ambitions and fears, loves and hates.

The workshops used the foundational Dojo4Life patterns, derived from the Constructive Developmental Framework of Otto Laske, which is built on the previous work of Kegan, Adorno, Jacques and many more.