Mortality, memories and I 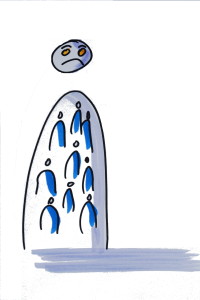 Minutes later with neighbours doing CPR to bring another neighbour, Vic back to life.

30 minutes later I’m holding the saline drip, 4 paramedics doing all they can. Well done guys, impressed by the calm teamwork from a NHS and St John’s working together.

Watching him turn blue, slowly sliding from is to was.

Vic. Almost 93. Chatty, happy, vitality writ large. Vic and Barbara each morning enjoying a cup of coffee in the cafe. Gardening, repairing the fence just before, shaping metal on his lathe.

Things change. Who am I, how am I changing and the same through this? What legacy am I bringing into the world?

I am my memories.

Vic lives on in my memory. The collective memories of those who remember how the world is a better place because Vic lived his life his way. A legacy spanning over 7 generations.

The echoes of the music of his life will make the world a better place for generations; certainly in his family, perhaps even beyond the lifetime of the neighbourhood’s teenagers that Vic’s life touched.

And Vic himself touched and was touched by people long gone. 10, 15, 20 – how many generations are in the long music of one person’s legacy?

We are who we are because of the people we touch, and that touch us. Because we leave the world a better place. Or not.

And that’s the central choice.

By realising the unknowability, the unpredictability, the constant change that makes life alive. By realising that we can only know too late whether our choices, our actions will leave the world better or worse. We never have enough information, especially not about what else will be caused by, or related to, the choice we’ve made.

Do, or not do. The legacy is not in doing right; it is in what we do next after knowing the first consequences of what we did before. And never knowing what the final consequences, final legacy will be.

The legacy of the disruptive innovation we’re creating in edge right now can span over 7 generations. People, fulfilled because edge enables them and their companies thrive. The legacy of Dojo4Life, of IDM, can span over 7 generations. Individuals and organisations leaving a powerful legacy because they “grew up” faster and further, became wiser through their life experiences.

Vic’s legacy living on in me? It matters not whether I’m 9 or 90. I’m never too young nor too old to show up in ways that feed the dream. The dream that the world can be just a little better because I’ve lived. Not just been alive.